UPDATE A Column With Its Current Value With Addition (SQL) 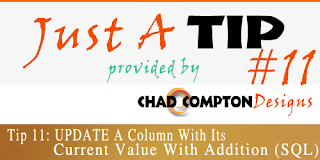 This week I ran upon an issue in SQL where I needed to actually do a Google Search to find an answer.  I knew how to do this in Visual Basic.Net (VB.Net), but had no clue how to do it via one single SQL statement which is my preferred method.  I needed to UPDATE A Column with its current value with an additional word added.  The column I was needing to update had multiple options.  Below I will show you 2 ways to complete the same project and you see which one you prefer.

I could have designed an update for every specific possible outcome and it would have worked just fine, but here lately I try to accomplish something with one perfect query.   Below I will show you both ways that  I am talking about.  You can pick the best one for your project.

Table results after the SQL statements below.

The first way would be to do 2 separate update statements that would UPDATE each specific DocumentType with the desired results.

The second way (the way I prefer) is to combine both of the above statements into one.

Both ways will give you the desired outcome, but as you can see the second way would be a great time saver if you had quite a few DocumentTypes that needed to be updated.

Email ThisBlogThis!Share to TwitterShare to FacebookShare to Pinterest
Labels: Just A Tip